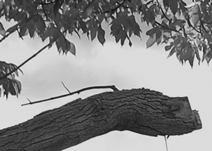 Marshal Petain did not know that he did not know how to fight a war in 1939. He still had all the knowledge he needed, however, to fight another war in 1914. The White Star Line did not imagine that a situation would occur in which the number of life-boats on board the Titanic would matter. Richard Nixon did not know that his actual culpability for the burglary of the Watergate offices of the National Democratic Party Headquarters would not matter, but his discussion of the incident in the Oval Office would eventually lead to his impeachment. Nicholas II did not know even the Russian peasants no longer regarded his position as the result of the direct intervention of God in the affairs of men.

For the last 14 months of his second term as President of the United States, Woodrow Wilson was virtually incapacitated.  His condition was kept secret from the American public and most of the government.  His wife, Mrs. Wilson--  Edith Bolling Wilson-- effectively ruled for him, appointing and dismissing officials and advisors, and shielding him from the scrutiny of members of Congress and even the vice-president.

How does a person know if one is not competent? Woodrow Wilson, apparently, did not know he was incapacitated. Mrs. Wilson did not know that she was not qualified to run the United States of America.

The sky did not fall.

On the other hand.... The New York Times article (sidebar) by Morris makes the argument that history might have been radically altered had Mrs. Wilson properly notified the authorities that her husband was no longer capable of executing the office of President of the United States.  Instead, in what is surely one of the most outrageous cases of hubris in history, she decided that she would just do it herself.  These men!  These cabinet secretaries and advisors and senators and staff...   what do they know that I don't know?

Think about this the next time you see Timothy Geithner or Lawrence Summers or Bernard Bernanke on TV.  Think about this as Senators fall over themselves to eulogize Robert Byrd, Senator for over 50 years, who seems have been much beloved.  Who loved him?  The citizens of West Virginia who rhapsodize about all the goodies he brought them from the federal government, all the buildings and freeways and public squares now named for him.

Edith Bolling Wilson was careful, in her auto-biography, to insist that Wilson was mentally competent at the time, and that it was Wilson's own doctor (who was dead when she published), among others, who insisted that humble little Edith Bolling undertake the task of relaying Wilson's authentic wishes to the world.  But Wilson's doctor and chief steward, in their own accounts, were clear: Wilson had no capacity whatsoever to convey any wishes, authentic or not, to anyone, nor to govern;  his reason was impaired.  Though he later improved somewhat, he was never the same person after the stroke as he was before it.  Edith Bolling Wilson, however,  issued numerous communiqués from her husband which were invariably written in her own tiny little script.  No one else was permitted anywhere near him.

There was no way for any reasonable person to get past Mrs. Wilson to determine if it ever actually was Woodrow who was doing to governing.

It was a critical moment.  The international treaty creating the League of Nations was up for ratification in the U.S. Senate.  Senate Republicans, led by Henry Cabot Lodge, were against certain provisions of the treaty. But Wilson seemed to take a hard line: no compromise. He'd rather see the bill fail than make a few adjustments, or give the Republican's a face-saving concession. Wilson-- or Mrs. Wilson, concerned that anyone should perceive a vacuum of leadership, brooked no dissent, no argument.

The treaty went down in flames.

Vice-President Thomas Marshall would surely have agreed to some of the amendments proposed by the Republican opposition-- as might have a healthy, rational, Wilson-- and the treaty would have been ratified, and the might and influence of the United States might have saved the League of Nations from it's cruel fate of impotence, ineffectiveness, and its ultimate collapse in the face of German aggression and French and British intransigence.

It is possible-- perhaps even likely-- that no stroke, no Hitler.

This is not the same as saying that Woodrow Wilson was indispensable.  The tragedy of Edith Bolling Wilson's deceit was precisely the result of her delusion that Wilson was indispensable, that no one else should be allowed to lead the country at a critical moment in world history --the same delusion held by Robert Byrd who should have retired years ago.

Tonight, I watched a documentary on the Berlin Wall.  There it was again--  Eric Honecker, Chairman of the Council of State for East Germany during the collapse of communism in Eastern Europe.  Honecker also did not know what he did not know.  As Hungary opened it's borders and Lech Walesa overturned the Polish government and Gorbachaev transformed Russia with perestroika, Honecker clung to what he knew: the totalitarian communist state.  As tens of thousands of East Germans marched in the streets, he ordered the police to crack down, like the Chinese in Tianamen Square.  His deputy, Egor Krenz, simply refused to transmit the order, and a lower echelon functionary inadvertently-- I'm not making this up-- announced that the borders were open, immediately.  The guards, confused, confronted with streaming crowds of refugees, opened the gates, and the genie was out of the bottle.