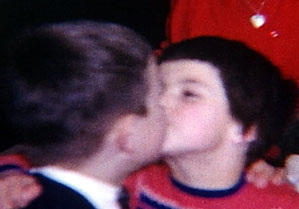 When I was about seven years old, about 43 years ago, my mother took me to her nation of birth, Holland, for a visit.  It was around Christmas time, celebrated earlier in Holland than in Canada, and at one of the family gatherings I was persuaded to dance with my cousin, Willy.  I think we were urged to kiss by my other cousins, so as we danced in circles around the small living room floor, we kissed several times, on the lips.  My uncle Wim filmed the occasion with an 8mm camera and he pans left to show the bemused faces of my older cousins and the other adults laughing.

I met Willy again in 1977 while I was traveling through Europe as a temporary college drop-out.  I traveled to the small town of Roekanje where she lived and we and her sister Nelltje took a long walk on a cold, cloudy afternoon and chatted uneasily. There was a bit of a cultural divide.  I felt like part of a generation of rebellious teenagers who were out to remake the world.  I think I was bit full of myself-- I was immersing myself in sophisticated European culture, after all.  Didn't my cousin find that admirable?

Willy struck me as aloof, as if she weren't interested or concerned.   I didn't feel that we connected, really.  I  have never seen her since.

There must have been music playing while we danced-- the old 8mm cameras didn't capture sound, of course.  Pity.

My uncle Wim bought me a beautiful M.A.Rklin train set for Christmas, which I still have, in a box in my basement. 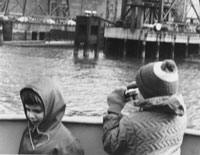 The image is a little jarring to me, but I remember that I always liked girls, even when I was very young, even Dutch cousins.   Here I am above with my Uncle Wim's binoculars, looking at the harbour in Rotterdam.  My uncle never married.  On this occasion, he took his sister and nephew and niece on an outing.  I remember it fondly, though I also remember Holland as being mostly cloudy and wet.

For my mother, at about the age of 42 or so, it must have been some trip.  She had immigrated to Canada with my dad in 1951, with five children.  They had three more in Canada.  It was  hard to make a living, to pay the bills and put food on the table and keep eight children under 10 years old from harm.  So here she is in Holland with just her youngest, visiting her brother, to whom I believe she was closest in her family, enjoying what must have been a respite.