[16] The acts of a subordinate done in compliance with an unlawful order given him by his superior are excused and impose no criminal liability upon him unless the superior's order is one which a man of ordinary sense and understanding would, under the circumstances, know to be unlawful, or if the order in question is actually known to the accused to be unlawful.

So the question is:  would a man of "ordinary sense and understanding" believe that it is okay to torture?

Sean Avery will lose his job because he called his girlfriend "sloppy seconds" but no Bush Administration official will even get a slap on the wrist for subverting the constitution. 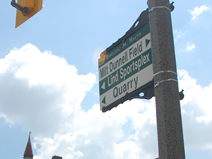 Will Bush pardon them all?  It almost makes we weep to anticipate that Bush will probably pardon them without admitting that any of them did anything wrong.  Even a child knows that you can't be forgiven for something you won't admit you did.  It would not be enough to merely force them to acknowledge committing crimes before they are pardoned for them, but it would be infinitely better than what will happen.

Ford pardoned Nixon in a similar fashion.  Nixon, if he had something like integrity, should have refused the pardon.  He should have said, "but I didn't commit any crimes."

What if Obama chooses, for political reasons, not to prosecute the Bush torturers.  But what if Obama changes government policy.  If he says we will not torture any more because torture is wrong.  Torture is illegal.  It is immoral.  It is deeply offensive to human dignity and constitutional democracy.  Then how can he not allow the Justice Department to investigate allegations that government officials broke the law?  That would also be repugnant.  Stay tuned...

"Lawyers are often asked to offer their views on complicated questions with significant real-world consequences, and the idea that offering the wrong answer could implicate an attorney in criminal wrongdoing is a frightening prospect to many in the profession. It is not surprising, therefore, that lawyers are reluctant to condemn fellow lawyers on the basis of the advice that they give."  Washington Post, December 17, 2008

Wow.  Those lawyers!  And I'm sure I'll hear some more complaining about how lawyers are unfairly targeted for vilification and abuse.... but maybe the lawyers should get together and disbar Mr. Woo, a Bush Administration flunky, and Jack Goldsmith, a law professor (!) responsible for the muck- worthy insidiousness above.  Mr. Goldsmith asserts here that lawyers that advise government officials to do something illegal shouldn't be held accountable because otherwise, in the future, they will hesitate to offer good advice to the government, like, "hey, why don't you torture them", or "arrest and detain them without evidence or due process".

The discussion relates to the question of whether Bush Administration lawyers and other officials should ever be investigated for authorizing acts of torture.  Hell, no, says Mr. Goldsmith.  It will have a chilling effect on the ability of lawyers to encourage breaking the law in the future.

Normally at this point I would think of some kind of analogy to try to make clear how wrong I think it is to torture people.  But that would be an insult to the idea that torture itself is about as evil an act as one can imagine.  And the fact that you start thinking, "does someone need to explain to the Bush administration why torture is wrong.... do they not understand what torture is?  Do they not care that, in the future, they won't be able to complain about American soldiers being tortured because our enemies will be more than happy to adopt our rationale?