Even Better Twin: "The White Ribbon". 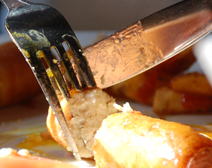 Sure enough, Greydanus likes the very Hollywood "The Blind Side", though even he has to acknowledge that Michael Oher is merely a prop for the Tuohys' amazing virtue, even though he doesn't admit that the scene of Mrs. Tuohy charging onto the field to encourage Michael to defend his quarterback is a far more ridiculous distortion of reality than anything in "The Magdalene Sisters".

He also loves "Star Wars", perhaps one of the most trivial popular films of all time.  He even gave "Episode VI: Return of the Jedi" an A- ! Perhaps because Darth Vader, as opposed to Sister Bridget, is such a richly developed, nuanced character.

In a separate review of a film called "Amish Grace", about the willingness of an Amish community to forgive a man who murdered their children, Greydanus is dissatisfied with the depiction of some journalists.  His comments are instructive:

A subplot involving a TV news crew investigating the sincerity of Amish forgiveness is the film’s most notable weakness. These outsiders are meant as bridge characters mediating between the audience and the Amish, but their merely journalistic investigative curiosity about the facts of the case is an obvious screenwriting foil. A more effective approach might have been to give the journalists complacent, dismissive assumptions about the Amish, about whom they presumably know little or nothing, and then gradually challenge and overturn those assumptions over the course of the story.

Here we have the naked Christian reviewer: he openly admits that a "true story" should have made up, out of whole cloth, a negative depiction of the media.

Here we have a reviewer actually suggesting that the film would have been improved if  the film-makers had only reduced a character to a stereotype.  He wants them to cater to that conservative Christian canard about the "liberal" media and it's alleged bias against true religion and traditional values.

My personal experience is that a lot of journalists have more respect for the Amish, who appear to at least be sincere about their religion, than they do for two-faced bigots like Michael Medved.

My biggest gripe with Hollywood movies, like "Shawshank Redemption", "Freedom Writers",  "The Blind Side", "The Fisher King", and, most egregiously, "The Dead Poets Society"-- and many others--  is the way they try to convince their audiences that they are having a deep, authentic experience, by showing you things that seem edgy and profound, but which, in fact, have been carefully packaged and cauterized to remove anything that might be genuinely provocative or compelling.

They habitually simplify life into villains who practically announce their nefariousness, and angels who practically wear halos.  You might think this is a benchmark of cheesey action flicks, but "The Blind Side" and "Freedom Writers" and "Mr. Holland's Opus" and the rest all do it with just as much cheese.  The audience is clued in on who to cheer for and who to hiss at.   The villains conveniently stand and listen in humiliation as the hero makes his or her grand speech.  Then they crawl away in defeat as virtue triumphs and goodness prevails.  When the film is supposedly based on a true story, these straw men are often fictionalizations.

What happens to the audience?  Because the film is careful to clue them in as to who is "good" and who is "bad", the audience feels that they possess the ability to make those judgments in real life, even if the people they know don't look like Morgan Freeman or George Clooney.  (They feel even better if it's Freeman-- I am not a racist!)

In real life, however, the good guy, the misunderstood artist, the person with the disability, don't have the charisma of George Clooney or Julia Roberts.  So we treat them just as badly as they are treated in the film.   If only a camera crew were around to record us, we might begin to recognize ourselves.  But not in the roles we expect.

I believe it encourages hypocrisy.  It encourages people to publicly embrace one set of values and believe they actually believe in them, while glibly practicing another.  Hollywood actually trains us to look for certain simplifications and signals that don't exist in real life.  We are convinced that if we saw the right clues, we would make the right choices, but those markings never appear in real people.   We believe we would know a Van Gogh if we saw him, but most of us buy our wall decorations from Walmart.

So I recently re-watched "The Magdalene Sisters", and I was struck at a number of times it refuses to cater to that uplifting feel-good Hollywood spirit.  For example, one of the "victims", named Bernadette,-- whom we're supposed to root for in the Hollywood version-- is caring for an older woman who is dying.  This older woman was not as cruel to the girls as the nuns were, but she did supervise the girls.  Bernadette, listens to the older woman ramble on about how she herself had a child out of wedlock years and years ago, and she didn't want to go to the hospital, and she wishes someone would stay with her.  But Bernadette is impatient to get on to her other jobs.  She says she has to go.  The older woman begs her to stay and comfort her for a while.  Bernadette hisses at her:  the nuns don't care about comfort.  They only care about getting the work done.  They don't care about you and I don't care about you either.  "So why don't you do us all a favor and hurry up and die".

It's a stunning moment, shocking, and yet utterly believable, and powerful.  But wait-- Bernadette is one of the "victims" of the movie-- she's supposed to be admirable and virtuous, so we can give her a rousing cheer when she escapes in the final reel.

But of course, that's not life.  It's not the reality of life.  It's the rose-tinted picture we are given by Hollywood, and, all too frequently, by the news, but it's not reality.

So when I read this review of "The Magdalene Sisters" by Steven D. Greydanus, I was puzzled by his distress:

the film simply presents its nuns, priests, and parents as cruel, judgmental, and evil — end of story. Its sole interest in them is insofar as they are responsible for the unjust suffering of the girls.

So whatever does he mean?  Does he believe that the girls' memories are wrong-- that actually, it was all more like "Bells of St. Mary's"?

I found the portraits of the nuns convincing and very believable. No, the film wasn't about the nuns, so it didn't spend a lot of time looking into their background or their personal lives outside of the convent-- but, seriously, does Mr. Greydanus believe they might actually have been nice?

In fact, I thought the strength of the movie was that it tried very hard to create a feeling of authenticity by leaving things in the movie that are not easily explained.  At one point, Crispina takes her night gown and soaks it in cold water.  Then she puts it on and goes back to bed.  Why?  We don't know.  It isn't explained to us.  The Hollywood audience walks out-- I don't get this movie.

But it struck me as exactly the kind of inexplicable detail a person would relate to somebody in real life.  When the real life listener asks "why",  the answer is, "I don't know".  To leave these things out of the movie, would be to create a false sense of logic and linearity to the plot that we never, ever experience in real life.  Real life is full of little puzzles and unpredictable turns of events.  In real life, events are often directed by hidden compromises and arrangements that aren't revealed to us by a narrator.

Astonishingly, Mr. Greydanus then proceeds to compare "The Magdalene Sisters" to "Birth of a Nation", D. W. Griffiths' tribute to the KKK.   I don't have enough bandwidth to explain to you why that is unimaginably perverse if you don't already know.  But Mr. Greydanus feels he has to defend Christianity against this film-- which is truly absurd.  Real Christianity has as little to fear from this film as capitalism has to fear from the sub-prime mortgage scandal.  Wait a minute...

At one point in the film, Sister Bridget decides to "treat" the girls to a showing of "The Bells of Saint Mary's", the saccharine Bing Cosby/Ingrid Bergman picture about saintly nuns and priests helping  disadvantaged youth in Brooklyn.   Sister Bridget introduces the film by confessing a "shocking" sin: from the time she was a young girl, she has had a secret love.... films.  It tells you something about Greydanus that he sees this as a token, inadequate attempt to "humanize" the nuns.  In fact, it is clearly a revelation of just how twisted they have become.  Sister Bridget expects the girls to find this "confession" endearing, and we see just how this has more to do with her own deluded self-image than with any genuine attempt to be kind to the girls.

It is a direct comment on those ridiculous lives of the saints stories that are in endless circulation wherein they try to tell you that St. Stuffedwig or whatever was not always incredibly pious and devoted, but could sometimes actually be mischievous and fun-loving.  Aaaahhh.  So you see, Sister Bridget (a wonderful performance by Geraldine MacEwan) is not really the stuffed shirt she seems to be.  Greydanus got it completely wrong, just as he got the entire film wrong.

And that's when I realized that his criticism that the film was not realistic was actually criticism that the film was not Hollywood enough-- it didn't give you a single evil character who was responsible for the evil that happened to Bernadette and Margaret and Crispina and who could then be vanquished by the forces of goodness in the end.  The problem with the film, though Greydanus doesn't admit it, is that it places blame squarely within the institution of the church.  The sisters are cruel to the girls because that's what they do: they try to bend the recalcitrant back to the will of God through brute force.  That's what the church stood for when it built these institutions, and that's what the nuns and priests were trained to do by the church.  If Greydanus wishes to be an apologist for the faith, he is right about one thing: this film, unlike cartoons like "Dead Poet's Society", is a genuine threat.